In December 1630 the site of what would become Cambridge was chosen because it was safely upriver from Boston Harbor, making it easily defensible from attacks by enemy ships. Thomas Dudley, his daughter Anne Bradstreet, and her husband Simon were among the town’s first settlers. The first houses were built in the spring of 1631. The settlement was initially referred to as “the newe towne”. Official Massachusetts’s records show the name rendered as Newe Towne by 1632, and as Newtowne by 1638. Located at the first convenient Charles River crossing west of Boston,

In 1636, the Newe College (later renamed Harvard College after benefactor John Harvard) was founded by the colony to train ministers. According to Cotton Mather, Newe Towne was chosen for the site of the college by the Great and General Court (the Massachusetts legislature) primarily for its proximity to the popular and highly respected Puritan preacher Thomas Shepard. In May 16th the settlement’s name was changed to Cambridge in honor of the university in Cambridge, England. Hooker and Shepard, Newtowne’s ministers, and the college’s first president, major benefactor, and first schoolmaster were all Cambridge alumni, as was the colony’s governor John Winthrop. In 1629, Winthrop had led the signing of the founding document of the city of Boston, which was known as the Cambridge Agreement, after the university. In 1650, Governor Thomas Dudley signed the charter creating the corporation that still governs Harvard College.

Cambridge was incorporated as a city in 1846, despite persistent tensions between East Cambridge, Cambridgeport, and Old Cambridge stemming from differences in culture, sources of income, and the national origins of the residents. The city’s commercial Centre began to shift from Harvard Square to Central Square, which became the cities downtown around this time. Between 1850 and 1900, Cambridge took on much of its present character by 1920; Cambridge was one of New England’s main industrial cities, with nearly 120,000 residents. Among the largest businesses in Cambridge during the period of industrialization was Carter’s Ink Company; whose neon sign long adorned the Charles River and which was for many years the world’s largest ink manufacturer.

Today, Cambridge is the sister city of Boston and is across the Charles River. Cambridge is the home of prestigious universities like MIT and Harvard. With several distinct squares (Harvard Square, Central Square and Kendall Square, Porter square), Cambridge’s diversity appeals to many people. It is also made convenient by the MBTA Red Line subway. Cambridge is home to a variety of unique restaurants and shops, as well as historically and culturally significant landmarks. Surrounding areas include Watertown, Somerville, and the famous Charles River. 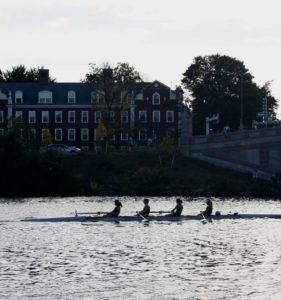 Out of Town News