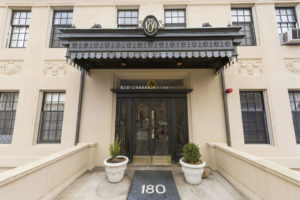 Back Bay is full of rich history and many Back Bay homes are no different. 180 Commonwealth Avenue is not the original building we see today. The original 180 Commonwealth Avenue was torn down and rebuilt in 1925. The first structure that held this special address was built by architect Samuel D Kelley, and was constructed in 1883. S.D Kelley was also responsible for 128 Commonwealth and a host of other buildings in Back Bay. Many Buildings you might notice are built or designed by the same person over and over again. When the building was first built the first owners moved in 1885 and James Melyne Latta and his wife Elizabeth Potter Latta. James Latta was a real estate and railroad investor. James was born in Indiana, and his wife had lived in Washington DC in 1860 and 1870’s. They lived on a farm in Elkhart, Indiana, and according to by 1880’s census, they moved to Boston when their son, William Jack Latta was attending Harvard. Jack graduated in 1889.

George Nelson Jacobs redesigned when the building was demolished for reason unknown in 1925 for Louis Kaufman, an eight-story, 32-unit apartment house. Louis Kaufman is shown as the owner of the original building permit application, dated January 15, 1925. 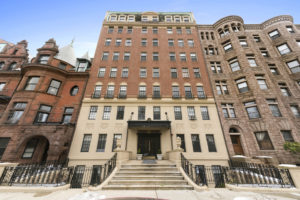 Jacob Marks is shown as the owner of 180 Commonwealth on the 1928 Bromley map. By 1938, 180 Commonwealth was owned by the General Commonwealth Corporation. The property subsequently changed hands and, by 1955, the number of units increased from 32 to 35. In June of 1974, it was converted into condominiums. 180 Commonwealth replaced two townhouses, at 180 and 182 Commonwealth. Even though it was converted into condominiums many of the positives 180 Commonwealth Avenue offered are still present from the unique facade that is eye-catching and architecturally stunning. Once you walk into 180 Commonwealth Avenue you walk through the front doors and wish the walls could talk and tell you what has changed around Back Bay and what has remained the same over the course of history. Condos in this building do not come on the market for sale let alone front facing Condominiums. In 2016 there were only three units that came on the real estate market and only one of the three were front facing. The lowest sale was in the high 800’s but other units on market sold in the mid or high 900’s. Anyone who owns at 180 Commonwealth Avenue sees a great return if you’re selling or owning even in a bad market. The average 2 bedrooms in 180 Commonwealth Avenue start at rent prices $3400 and go up to the 4,000 ranges. If you would like to call 180 Commonwealth Avenue home or looking for a property as a great investment then hopefully you will take a moment and check out 180 Commonwealth Avenue Unit 16, The unit coming on the market offers a front facing view, spacious floor plan that offers vestal living. Two beds one bath offers ample living space with 925 square feet of living space. Located on the 5th floor in an elevator building in a professionally managed building. Contact me for more information for pricing and additional details. If you would like to get into this property before the general public contacts me and let’s get you into this fantastic new listing at Gibson Sotheby’s International.